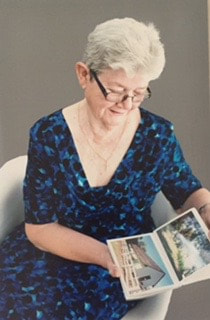 Meetings are held every second month, on the second Wednesday from 2pm at Club Mudgee.
For further information contact June Ritar (6374 2846).

Our member June Ritar shares her life living with Parkinson’s. June is one of the people featured in the recently published international book  "Faces of Parkinson's: Global Reflections on PD".

Parkinson’s has had a profound impact on my life since my diagnosis in 2007. It has made me aware of my mortality and the need to leave happy memories to my children, grand-children and my great grandson. I am determined to be there in the important times in their lives, participating, celebrating and enjoying.

To achieve this I stay active and exercise to maintain my mobility, peddling 10 kilometres daily on the exercise bike and walking where possible. I eat a balanced diet and exercise my brain with reading, crosswords, Scrabble, Mah Jong and cards.I have been involved with Mid-Western Parkinson’s Support Group since its inception in 2010 holding several leadership positions and organizing fundraising events.

​My motto is to do what I can, while I can. My husband, Karl supports and encourages me 100%. We attend seminars in Australia and overseas including the World Parkinson’s Conference in Montreal in 2013. Having PD has reinforced my decision to think positively

​"Faces of Parkinson's: Global Reflections on PD" is a book highlighting individuals touched by PD. Prior to the World Parkinson's Congress in Portland Oregon in September 2016, those registered to attend were invited to participate in a special project, which involved writing an essay on how Parkinson's had impacted on their lives. Photos were taken during the WPC.

The book introduces 63 people living in 15 countries who shared stories of tenacity, love, passion for their work, triumphs, joys & fears. They are people living with Parkinson's, their care partners, movement disorder specialists, nurses, rehab therapists & advocates. They represent the PD community & are what makes the WPC special.

Elizabeth Pollard, the Executive Director of the World Parkinson Coalition said, "We trust that this book will give you hope & inspiration."

​My response was one of the 63 stories chosen. There are 2 other Australians & 1 New Zealander. Others come from Asia, Canada, UK, Europe & the USA. I am honoured to have had my story chosen & am grateful to the WPC.